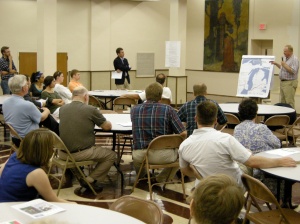 John Delaura from MARP gives an overview of the existing system.

The East Lansing Michigan By Rail Forum saw another sizable crowd gather for the purpose of beginning a state-wide discussion on the future of rail in the State. After brief introductory remarks by State Representative Mark Meadows and East Lansing City Councilman Nathan Triplett, the participants divide into nine groups, and collaborated to map out where they would like to see stations and rail lines. 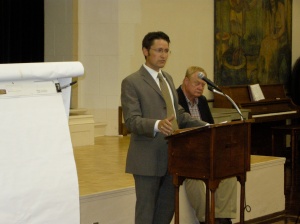 Following the mapping exercise, the groups had the opportunity to present their maps, and explain why they had chosen the routes and stations they did. Many of the groups created maps that were similar in their overarching themes: connecting places and population centers, connecting universities, creating access to tourist destination, and connecting to Detroit Metro Airport. You can see a photo slideshow of all of the maps from both the East Lansing and Royal Oak meetings by clicking the “Event Maps” tab.

Other participants stressed the idea of using the rail as a way to connect Michigan with surrounding states and Canada- with several groups indicating they would like to see rail options for trips to destinations east like New York, Cleveland, and Philadelphia, as well as connecting the U.P. to Chicago via Green Bay and Milwaukee.

The meeting was attended by a mix of stakeholders, college students, experts involved in various aspects of planning and transportation, and local citizens. The mapping exercise was followed by a lively question and answer session, which included lots of good discussion on topics including historic station preservation, the history of Michigan’s rail lines, funding options, high-speed possibilities, and ended with some solid information from Councilman Triplett about how to effectively engage legislators on the topic of Michigan’s Rail Future.