In the summer and fall of 2010, Michigan Environmental Council (MEC) and the Michigan Association of Railroad Passengers (MARP) convened a series of statewide public forums focused on Michigan’s rail system.  In total, sixteen Michigan By Rail public forums were held across the state.

The purpose of the Michigan By Rail public forums was to begin a statewide conversation about Michigan’s passenger rail system, to better understand what Michiganders want out of passenger rail, and to encourage citizens to submit their ideas to the Michigan Department of Transportation (MDOT) for incorporation into the official State Rail Plan.

The forums took place on weekday evenings and were primarily participant-driven.  For clarity, MEC and MARP clearly distinguished the Michigan By Rail public forums from MDOT’s four listening sessions.

Short introductions of the sponsors, local partners, and elected-official hosts followed the opening remarks of each session.  Three United States congressmen, twenty-five state legislators, more than twelve mayors, and numerous city council members and township officials hosted the events.  Over 100 local partners, including more than 40 municipalities, eighteen chambers of commerce, seven planning departments, six conventions and visitors’ bureaus, and many others, helped publicize the forums.  After all sixteen forums roughly 1,100 citizens had participated. 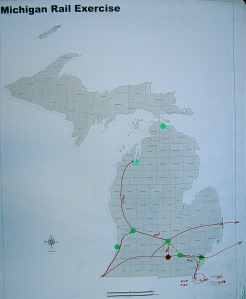 One of the maps created by participants during the forums; this one illustrating new services connecting to Traverse City, Ontario and Toledo, as well as an East-West route between Detroit, Lansing, Grand Rapids and Holland

Interactive mapping sessions consumed the majority of the forums.  Participants clustered around tables in groups of about ten.  The participants were given large Michigan maps which contained only county lines.  The participants were instructed to first place a sticker on the map which indicated where they considered home.  Then, they placed another sticker on the map at a place that they considered to be important to the state — a natural area, culturally significant place, etc.  Some participants used more than one sticker.  They were then instructed to draw lines on the map where they would like to travel by passenger train.  They also were reminded to consider freight rail traffic.  Finally, a person from each table presented that table’s map to the group at large — summaries of discussions, an explanation of what they drew on the map, and so on. The full group had the opportunity to question and comment on each map.

A representative from Amtrak or the MARP explained Michigan’s current passenger rail system after the map presentations.  The overview of the current system was intentionally delayed until after each table presented its map so as not to influence the mapping session.  The system overview led into wide-ranging discussions that varied from forum to forum based on participant interest.

MEC and MARP collected input from participants about the current passenger rail system and their visions for its future.  Participants’ comments and the maps they created were collected and were used to prepare the Summary of Findings from Michigan By Rail Public Forums.

Five themes emerged over the course of the sixteen forums:

Each map at each forum included connecting Traverse City to the southern part of the state in some fashion.  The southern connection points varied between Grand Rapids and the Ann Arbor area depending on where the forum was held.  The maps, discussion, and comments, however, were consistent across forums regarding a Traverse City to southern Michigan passenger rail connection.

Almost every map included connecting Michigan’s east side to west side from Detroit to Lansing to Grand Rapids (and often Holland).  Discussions around this passenger rail connection focused on linking together Michigan’s three principal cities (without first traveling to Chicago); commuter possibilities; connecting major universities; make doing business easier in the three cities; and tourist travel — sports venues in Detroit, Art Prize in Grand Rapids, and the Capitol and other state government interests in Lansing.

Participants consistently mentioned a desire to connect Michigan’s universities and colleges. Some Michigan college towns are currently served by Amtrak; increasing service frequency, re-scheduling to accommodate the academic calendar, and connecting the college and universities together were reoccurring points.  The rationale that surfaced most typically in connecting the state’s academic institutions was to allow for instructors and students to more easily work and study at more than one institution.

Connecting Michigan’s existing passenger rail system to Toledo came up at each forum.  Participants discussed that one must travel to Chicago — or by motor coach to Toledo — to travel to points east such as New York.  Connecting Toledo to the Wolverine at Ann Arbor or Detroit was typically suggested.

Click here for our full report of findings from public forums, published in February 2011.