Strong public transportation is a valuable commodity to any major metropolitan area. I saw this firsthand when I recently visited Amsterdam, in the small European country of the Netherlands. The difference was stark between Michigan’s dysfunctional bus routes and nearly nonexistent rail routes and the fast, inexpensive, and convenient transport found in Europe. Their transportation options included trams, the Metro, bikes, buses, and commuter rail, and we rode them all! The tram and Metro ran on the same track in the suburbs but split downtown, with the Metro running underground and the tram running on the streets.

I stayed in an apartment in a suburban town and was within walking distance of a tram and Metro station connecting me to downtown. From the Metro’s Amsterdam Centraal Station, one could switch to intercity trains and cruise ships out of the city.  The tram took 40 minutes and the Metro even less time to get to popular tourist destinations like the Artis Royal Zoo, Van Gogh Museum, Dutch Resistance Museum, and a canal cruise. Only once did we use a car, to visit the windmills and chocolate factory at Zaanse Schans in the Dutch countryside. 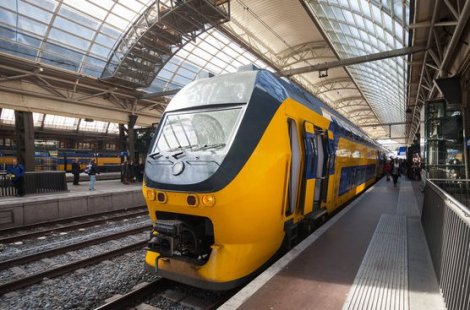 We were also able to ride an intercity train between the Amsterdam Centraal Station and The Hague. The total train ride took about an hour and we zoomed along at approximately 130 kilometers per hour (80 mph). We went to a history museum and walked around town before hopping on a train back to Amsterdam. In Europe, trains are as popular a transportation option as cars. Trains left Amsterdam every half hour to multiple destinations in Europe. Our vacation would have been significantly harder if we weren’t presented with such exceptional train service.

Detroit’s transit situation is very different than Amsterdam’s. Metro Detroit has roughly double the number of people as the Amsterdam metropolitan area, but has a must less refined transit system. The city currently has no regional transportation options, only local buses, the People Mover, and the new QLINE streetcar from Congress Street to Grand Boulevard, set to start operating in the spring of 2017. I have been to Detroit many times but have only recently used public transportation when I rode the People Mover to a Red Wings game. Until the QLINE opens, Detroit will continue to be the largest city in the U.S. without surface rail. Due to route boundaries and funding deficiencies, local buses do not run everywhere and are often unreliable. The People Mover and QLINE are both short and run only in the cities’ core, making them not very useful for the commuting suburban workforce. 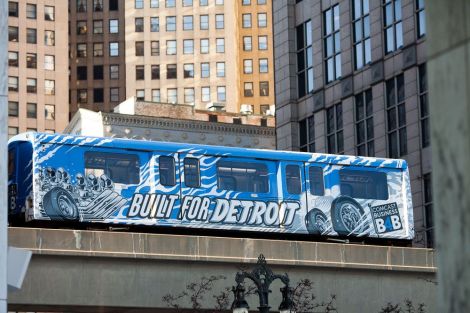 It is important that we invest in our transportation infrastructure for many reasons. First, public transit keeps cars off the road, which leads to a reduction in potholes and traffic. Every year, Michigan spends millions of dollars repairing roads due to the spring thaw and heavy traffic. Michiganders spend countless hours gridlocked in traffic along heavily used I-94, I-75, and I-96.

Third, public transit can provide an equitable transportation option that allows senior citizens, those with disabilities, and low-income residents to travel. With improved transit, those who may now have to rely on a family member or friend to drive them would be able to go to the grocery store or go to a baseball game by themselves.

There are currently multiple proposals for improved public transportation in Metro Detroit, with three specific rail projects that would connect the city with other parts of the state. The Ann Arbor-Detroit commuter rail project would connect Ann Arbor to Detroit with possible intermediate stops in Ypsilanti, Wayne, and Dearborn. The line would run 38 miles on existing rail lines currently used for Amtrak trains. This project is part of the Regional Master Transit Plan (RMTP), put forth by the Regional Transit Authority of Southeast Michigan. The  RMTP for Metro Detroit incorporates bus rapid transit, commuter rail, and a streetcar into the city’s fabric. Voters in Oakland, Washtenaw, Wayne and Macomb counties will have the opportunity to vote on this plan in November. If a majority of those four counties vote yes, the plan will become a reality in southeast Michigan.

Another proposed commuter rail line known as the WALLY would run from Ann Arbor to Howell, with the main goal of alleviating traffic from US 23 in Livingston County. An estimated 1,300 riders per day would be served with possible stops in Genoa Township, Hamburg, Whitmore Lake, Barton Road, Ann Arbor Downtown, and the University of Michigan Stadium.

The last proposed rail project is the Coast-to-Coast project which would use passenger rail to connect Holland on the west side of the state to Detroit in the east. The project would run 186 miles and connect colleges, businesses, and medical centers at either 79 or 110 mph.

Improving intercity rail is important to our state because it will allow corporate employees to move from city to city in a timely fashion while providing a comfortable, Wi-Fi-enabled work space. In Europe, we witnessed this first hand when we walked through the train past the business class. There were many well-dressed women and men who were typing away at computers and tablets while talking on their phones. This is what I envisioned the Coast-to-Coast passenger rail would look like – it would be beneficial to students, tourists, and local residents. Imagine if you could get on a train in Detroit and ride to the Holland Tulip Festival without having to worry about the hassles of driving. Michigan State University and University of Michigan students could even ride the train from their campuses to see each other battle in football, basketball, and hockey! The opportunities are endless for Michigan’s economy and mobility.

Visiting Europe made me appreciate what a good mass transit system can do for a region. I took those experiences and compared them to what could be in our own state. Imagine if you could chug into Detroit on a commuter train instead of being gridlocked on I-94 for 2 hours! With the RMTP, the proposed WALLY commuter line, and Coast-to-Coast project, Michigan is creating building blocks to join the ranks of Europe in public transport.